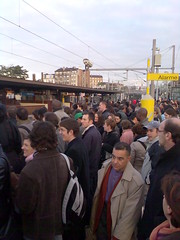 The French need some kind of pension reform. The current French state budget is seriously in the red at roughly 7.5% of GDP last year, well outside European norms. France have a policy of statutory retirement from the age of 60, for men and women. This is already more advantageous than the UK where it has been at 65 for men, 60 for women since I can remember – and now seems to be indexed on the number of qualifying years.

Of course the unions are all out on strike tomorrow with most complaining in simple sound-bites about how everyone will have to work longer before retiring whilst conveniently ignoring the massive budget deficit, increasing life expectancy and the fact that state pensions are a pittance anyway. Far better to invest in a private pension in order to retire early, instead of living – though the state hardly sets a good example – beyond your means and hoping that as soon as you’re 60, the state will provide because it doesn’t and won’t.

The strangest thing is the way the media seems to be managing pension reform. I’ve heard people close to retirement age call in to radio stations with invited politicians on a panel and complain they will now have to wait longer to get their pension. These people will in fact be unaffected by the new pension plans which will not come into force fully until 2018. The roll-out will be on a sliding scale – those born in 1950-1956 will not be required to work a full further 2 years to get statutory pensions. Even then, there is also a system of qualifying years (41 for France compared to 44 for the UK). On top of all that, the French system indexes pensions on earnings in the last years before retirement, whereas the UK system is indexed on contributions. Did anyone on the panel explain this to the caller? The responses sounded rather obfuscated to me, with debate on how they might define exceptions to the rules and other information which played on the complexity of the reform rather than serving it in palatable doses.

Other major differences include when you qualify for any kind of pension – in the UK there are “basic” and “additional” pension requirements. In France there’s a notion of “full” pension at 65 for men, but a plethora of exceptions for state workers, and those who have physically demanding jobs.

From my point of view the big failure of the French state is that Nicolas Sarkozy is increasingly seen as an elitist with a xenophobic agenda. He certainly does not suffer fools gladly and seemingly has nobody in his party willing to explain properly the ramifications of his needed reform. Corruption and nepotism has been quite visible too, but then the UK can hardly say it’s any better in that respect. So we’re set for a drawn out program of strikes just so someone might deign to make sense of the situation. Instead of which the system will become so complex that nobody will be able to understand it, and everyone will have lost. You still won’t be able to retire at 60 – or 65 – on a decent income anyway.

The French should not be allowed to retire until they have made up all of their strike days. I think a two year extension is generous!